Buttercream by Cream Team is a sweet, buttery e-liquid that was made for vapers with a sweet tooth. The e-liquid is exploding with flavor. It tastes rich and fluffy. It is impossible to get tired of something that tastes this good. The taste will blow you away. If you do not like sweet e-juice blends, this one is not for you. Buttercream is the kind of e-juice to grab 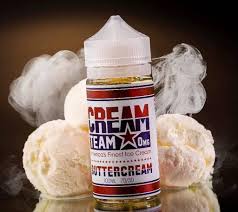 if you want to give your taste buds a treat. Since it has a strong flavor, this Cream Team e-liquid is perfect for mixing with other e-juice flavors. This is an all day vape for those who like e-liquid flavors that are in-your-face.

Buttercream by Cream Team is very creamy and buttery. While it is very sweet, it is not the sweetest e-liquid on the market. The overall flavor of this e-juice is very smooth. It tastes milky and has hints of cake flavor. Some vapers have also said they can pick up light notes of nutty flavor in the mix. If you have vaped Duchess by King’s Crest, you will notice some slight similarities in their taste. Some have also said that it tastes kind of like a pecan ice cream. When vaping Buttercream, the flavor does not change much on the inhale and exhale. You get the same sweet, buttery and creamy taste. There is a touch of nutty flavor on the exhale.

Like other blends in the Cream Team series, Buttercream comes with a vegetable glycerin (VG) and propylene glycol (PG) ratio of 70/30. It is not as thick as you would expect a 70vg e-juice to be. However, it is still suitable for dripping. Buttercream does not always come pre-steeped. If you buy a bottle of this e-liquid and you think it has not been steeped, do not hesitate to steep it for like a week. The vapor production of this e-juice is awesome. You will get loads of vapor from each hit off this e-liquid. This is one for cloud chasers. 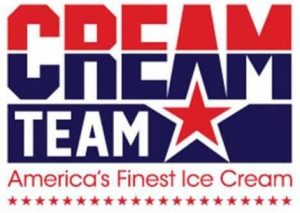 Buttercream has the typical packaging design that Cream Team uses for all its e-liquids. It comes in a 100ml chubby gorilla unicorn bottle. There is a label on the bottle which has the same colors as the American flag. You will have not issues filling your tank or dripping on your coils straight from the bottle. The bottle is also clear so you can see the level of the e-liquid left in the bottle at all times. The packaging of this e-liquid is quite good and gives a good impression about the brand. The only con is that you can’t carry a 100ml bottle in your pocket when you want to vape this e-liquid on-the-go.

The Cream Team e-juice line is the result of a collaboration between King’s Crest E-Liquid and Jam Monster E-Liquids. Both companies are based in Florida and have made a name in the industry due to the exceptional quality of their products. Looking at the reputation of both companies, you can expect nothing but excellence from the Cream Team brand. Apart from Buttercream, the other e-liquid flavors in the Cream Team series are Cinnaroll and Neapolitan.

You can get the Cream Team e-liquids on most vape stores. If you want to get the best price for this e-juice, visit Ultimate Vape Deals where a 100ml bottle of Buttercream is going for only $16.99.

Naked Unicorn vape juice by Naked 100 has the freshness of strawberries and smooth cream flavor. This is an e-juice that you cannot...

French Vanilla is a delicious vape juice that will impress vapers with sweet tooth cravings. This Atomic Dog Vapor e-liquid has a sweet...

Ice Tropic Thunder by Humble Juice Co. is an e-liquid that will remind you of going on a vacation to somewhere tropical. This e-juice is a...