Sugar Drizzle is another special e-juice from Cuttwood. The e-liquid used to be known as Sugar Bear. Cuttwood decided to change the name and changed it to Sugar Drizzle for unknown reasons. However, the recipe has remained the same. For what it is worth Sugar Drizzle does sound more unique than Sugar Bear, and this e-juice blend is downright unique if nothing else. If you have been looking for the perfect breakfast vape, this is it. Don’t be surprised if you find yourself reaching for a cup of coffee once you start vaping 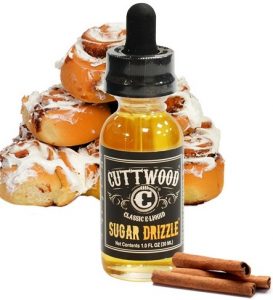 Imagine what it will taste like if you took a freshly baked churro that is topped with sugar and cinnamon, and dipped it in a cup of milk. Cuttwood’s Sugar Drizzle is as yummy as it gets. You will not get tired of vaping this e-liquid quickly. The flavor of baked pastry is on point. It is almost like you can taste the hard crust of the churros. What’s more, the cinnamon in this e-liquid is not too strong. Usually, e-juice blends that contain cinnamon can be harsh on the throat. At best, Sugar Drizzle has a light touch of cinnamon. The smooth milky flavor compliments the spicy cinnamon and sweet sugary flavor in this e-liquid to create a sumptuous mix. On the inhale, you can taste the churro with cinnamon and sugar. On the exhale, the milkiness of the mix comes to light.

Sugar Drizzle by Cuttwood has a vegetable glycerin (VG) and propylene glycol (PG) ratio of 70/30. This is just the kind of e-liquid to drip. It will not blacken your coil heads quickly. You can even switch between flavors while dripping and this e-liquid will not leave any lingering taste provided your coils are dried before you dripped the other e-juice. If you choose to vape Sugar Drizzle from a tank, it is not advisable to use a polycarbonate tank since it contains cinnamon. Instead, use a glass tank. The best part about vaping this Cuttwood e-liquid is that the taste actually gets better as you pump up the wattage. The vapor production of Sugar Drizzle is fantastic. You will get lots of gigantic milky clouds from vaping this e-juice.

Cuttwood’s Sugar Drizzle comes in 0mg, 3mg, 6mg, 12mg, and 18mg of nicotine. This means that no matter how much nicotine you like in your e-juice blend, you will be able to enjoy 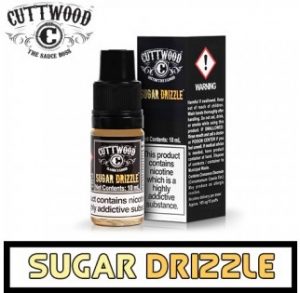 Sugar Drizzle comes with a similar packaging design as the other e-liquids from Cuttwood. It is packed in a clear glass bottle with a childproof dropper cap. There is an elegant black label on the bottle which features Cuttwood’s logo. You will find some information about the product on the label. Sugar Drizzle is one of those e-liquids that needs to be properly steeped if you want to get the best from it.

Sometimes this Cuttwood e-juice comes pre-steeped. But if you buy this e-juice and it is not pre-steeped, you can steep it for a week or two. You can tell when an e-liquid is steeped because it will become dark, amber in color.

You can get a 30ml bottle of Sugar Drizzle on Combo Vape for only $14.95. The retailer is also selling 30ml bottles of some other e-liquids from Cuttwood including Mega Melons, Unicorn Milk, Boss Reserve, and Bird Brains for the same price.

How to Steep Your Vape Juice

Fermentation can make wine better. This is also true with e-liquids, but instead of fermentation, it is steeping. Some -juice...

Red Bird was the second e-juice flavor released by Bluebird E-Liquid. It is a combination of dessert and breakfast flavors. The e-juice has...

Unification E-Juice by The Merge Review

Unification by The Merge is a sweet and creamy dessert e-juice for every vaper with a sweet tooth. It has a rich and decadent flavor that...

Grape Bubblegum is another fantastic e-juice from VapeJoose. As you expect from an e-liquid named Grape Bubblegum, this e-juice has a grape...

Butter Brew by Yami Vapor is a tasty e-liquid with butterscotch candy flavor. This e-juice has a complex butterscotch flavor with a sweet...