Recently, I received a message from Virgin Vapor announcing the availability of a new variable voltage electronic cigarette called the GS-SUB, also known as the Vision TOX. This is a variable voltage mod with the ability to operate between 3.0 and 6.0 volts, and its a full starter kit that costs under $70.00 $30.00 less than the Lavatube. I immediately realized that the GS-SUB/Vision TOX could be a real game-changer in the variable-voltage segment and asked Virgin Vapor if they could provide a review sample. When my GS-SUB arrived in the mail, I was not disappointed; the box was overflowing with accessories. If you like to know you’re getting a lot for your money, the GS-SUB is definitely going to appeal.

I’m a big fan of variable-voltage electronic cigarettes. For former long-term smokers like myself, they’re the best way to get the taste and throat hit needed to make the switch from smoking to e-smoking easy and pleasurable. At just $69.95, the GS-SUB/Vision TOX is the most affordable variable-voltage mod I’ve seen to date. While it isn’t a ProVari killer, its definitely comparable to the $100 Lavatube and far superior to any mini electronic cigarette. It also has a few features that make it quite unique. 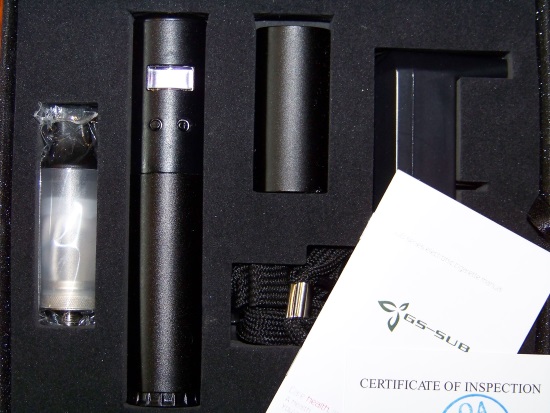 As I mentioned at the beginning of my GS-SUB/Vision TOX review, this is an e-cigarette kit that’s sure to please anyone who loves to get a lot for their money. When you open the extremely attractive box, you’ll find the following:

The thing that makes the GS-SUB/Vision TOX so unusual is its modular design; the control head contains the boost circuit needed to adjust the power from the battery to the desired voltage as well as the firmware needed to access the e-cigarette’s various features. The removable battery tube allows you to change its configuration at any time to optimize the GS-SUB/Vision TOX for better battery life or smaller size. Either way, the device is incredibly light – much lighter than either the Lavatube or the ProVari.

One thing you’ll notice about the GS-SUB/Vision TOX – referred to simply as the GS-SUB going forward – is that very little metal is used in its design, which is what gives this e-cigarette its extremely light weight. The GS-SUB weighs just 70.7 grams with the long battery and 57.3 grams with the short battery. By comparison, the Lavatube weighs 98.2 grams and the ProVari Mini weighs 126.6 grams. The downside, of course, is that the GS-SUB may lack the long-term durability of its variable-voltage rivals. I think you’ll definitely want to be careful not to drop it.

In terms of appearance, I think that the GS-SUB looks a little nicer than the Lavatube, but not quite as nice as the ProVari. Some Lavatubes have a few little appearance issues such as defects in the finish and a tendency for atomizers and cartomizers to lean a little to the side. The GS-SUB has none of these issues, but its plastic design means that you can see things like seams and mount points on the back and sides of the control head.

The GS-SUB has a wonderful OLED screen that beats the utilitarian displays of the Lavatube and ProVari hands down. Unlike the retina-burning ProVari display, the GS-SUB screen displays items at the perfect brightness level. The larger number of pixels also allows the GS-SUB to display items in a readable, friendly font. The control head even has a fun little surprise that I’ll describe in a bit. 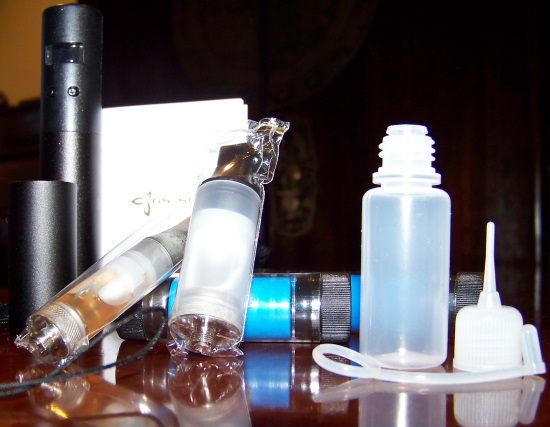 The GS-SUB/Vision TOX includes a great collection of accessories.

When you get the GS-SUB, you’ll want to charge one of the batteries fully before you begin playing with it. My GS-SUB review unit arrived with both batteries almost completely empty. To charge a battery, place it in the charger so the positive side – indicated by a “+” on the battery – faces the charger’s sliding terminal. Then, plug the charger into a wall outlet. When the light turns green, the battery is charged.

The control head of the GS-SUB e-cigarette does a bit more than simply allowing you to change the voltage. The first of these functions is the puff counter; when you click the fire button quickly, the screen will display the current battery life and the number of puffs you have taken with the GS-SUB so far. Each time you hold the fire button longer than half a second or so, the puff counter will increment.

When you press and hold the “-“ button, you’ll enter the menu system of the GS-SUB, which is far more intuitive than that of the ProVari. Press and hold the “-“ button to advance to the next menu option. When you reach the current voltage, tap either button to change it. When you reach the date and time, hold the “+” button to advance through the different values and tap either button to change a value. The menu closes if you don’t press anything for a couple of seconds. In addition to the puff counter, battery life, voltage adjustment and date/time screens, the GS-SUB has a screen displaying the total number of minutes you’ve spent vaping since the last battery charge.

What’s the secret of the GS-SUB, you ask? Tap the fire button five times 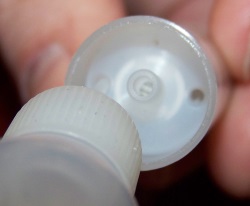 quickly to turn the unit off. When you do this, the friendly message “Goodbye, My Master!” scrolls across the screen. I definitely had to chuckle the first time I saw that. Tap the fire button five times again to turn the GS-SUB back on.

With all of these features, I have to note that the GS-SUB also has a big “gotcha.” Everything resets when you remove the battery. You’ll lose the date and time, your last voltage setting, your puff counter – everything. While it’s no trouble to return the voltage to the desired setting, I think this limits the usefulness of the date and time feature quite a bit. 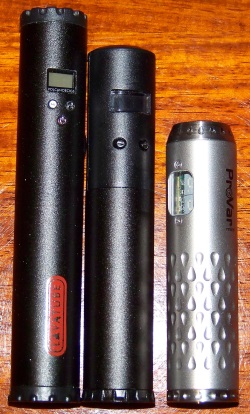 The GS-SUB works on the same principle as the Lavatube and the ProVari; the unit draws power from a single battery and a boost circuit adjusts the voltage to the level you set. This is a safe, proven method of operation for a variable-voltage electronic cigarette – far safer than the models that use stacked batteries. At six volts and with a freshly charged battery, I find that the GS-SUB produces about as much vapor as the Lavatube. I always test variable-voltage electronic cigarettes with Boge 510 cartomizers, which happily operate at six volts without producing the dry burn that you can get from some other cartomizers. The GS-SUB has a very free, airy draw, contributing to the overall impression that it produces a significant volume of vapor.

The boost circuit of the GS-SUB can’t quite supply the full six volts as the battery is discharged. While it’s still more vapor than you would get from a small e-cigarette, you may find yourself wanting to remove and charge the battery of the GS-SUB after 100 puffs or so once you get used to the extreme vapor and flavor of six-volt vaping. This isn’t unusual; the Lavatube has the same problem. The ProVari doesn’t, but it costs three times as much as the GS-SUB. Subjectively, I think the voltage curve of the GS-SUB is a little steeper than that of the Lavatube, although I don’t have a voltage meter to confirm.

Most electronic cigarettes shut off automatically to prevent overheating when a puff exceeds a certain amount of seconds. The Lavatube has a ten-second puff timer, while puffs on the ProVari are limited to 14 seconds. The puff timer of the GS-SUB is much shorter – just five seconds. This may or may not be a problem for you; I find that my average puff on an e-cigarette is about seven seconds. This means that the GS-SUB cuts off before I’m finished. Ive found that I can get around this problem easily by quickly releasing and re-pressing the fire button mid-puff. The GS-SUB counts this as two puffs, inflating the puff count a bit.

With the Vision cartomizer, the purity of the flavor isnt quite what Id like it to be. If you try the Boge 510 cartomizer something that Virgin Vapor also sells at a spectacular price youll see what I mean. The vapor produced by the Boge tastes much more like what youd get by <>dripping e-liquid directly into an atomizer, while the Vision cartomizer brings a bit of a plastic flavor to the party. On the bright side, the plastic flavor does start to fade after the cartomizer has been broken in for a couple of days. The second drawback of the Vision cartomizer is the fact that it wont operate at six volts. At anything above four volts, the e-liquid doesnt wick to the heating coil quickly enough, causing the coil to run dry. If you want to run the GS-SUB consistently at six volts, youll want to use the Boge 510 cartomizer.

Whether you call it the GS-SUB or the Vision TOX, the price of this e-cigarette makes it a serious contender in the variable-voltage segment. If you’re a heavier smoker on a tight budget and want to switch to e-cigarettes, I’d suggest that you consider skipping the “mini” e-cigarettes and heading straight to the GS-SUB. Youll get better vapor production and youll probably spend less money. If youre an experienced e-smoker, you should know that the GS-SUB isnt in the same league as the ProVari. Given the enormous price difference between the two, you probably expected that. However, the contest between the GS-SUB and the Lavatube is a tighter one; with fully charged batteries, I feel that the two perform about the same. However, the Lavatube remains at or near its maximum vapor production for a greater portion of thebatterys discharge cycle, while the GS-SUB starts to trail off after about 100 puffs. If youdont mind switching batteries when this happens,youll never notice the difference. The GS-SUB electronic cigarette is definitely worthits very reasonable price tag.

This is no longer available-why not try V2 Cigs?

The Recurve is easily the most popular RDA from Wotofo. This RDA is the result of a collaboration between Recurve and YouTuber Mike Vapes....

Atmos is one of the most prestigious companies in the vaping industry. This company makes some of the best vaporizers on the market, and...

Joyetech is known to produce highly successive vaping products in the market today. Something to look out for is its eGo AIO Starter kit...

The iClear 30s are dual coil cartomizers metering at 2.2ohms with changeable heads fitting into a tank that holds 3mls of liquid. My usual...

Authentic Kanger eVod electronic cigarette starter kit. These kits will fit any eGo or 510 atomisers or clearomiser system we...